Delta Airlines announced a significant change in their qualification metrics for their frequent flyers that may reflect a more general trend in the industry. In short, to qualify for elite status, it was no longer enough to collect mileage with Delta and its airline partners in SkyTeam, it was also necessary to spend money on Delta flights more specifically. Without spending a preassigned threshold of Medallion Qualification Dollars (MQDs), Delta’s frequent flyers could not be guaranteed elite status (see the table below). 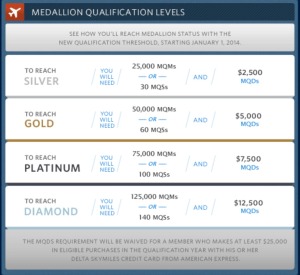 Traveler discussion boards and social media venues understandably gave the changes thumbs down. Delta Airlines is the first major “full service” airline to explicitly measure loyalty by how much money you spend with the airline. In some ways, it’s entirely logical that a network carrier like Delta that offers flights to almost all major destinations worldwide should be rewarding its customers for choosing Delta rather than its SkyTeam partners since it captures the lion’s share of the revenue on a flight it operates. NBC News estimates that in 2011 alone, there were almost $16bn worth of unclaimed frequent flyer miles. According to http://www.frequentflyerservices.com, between 1981 and 2005, the number of available frequent flyer miles rose from 2.2 billion to 14 trillion!

These represent a potential liability for airlines – unless they can have them expire, lower their value (by increasing the number of miles required for award tickets or upgrades) or restrict their usage. Another tactic being increasingly adopted by European carriers is to raise their “fuel surcharge” and other non-refundable charges on award tickets relative to those levied on a ticket paid for by cash.

All in all, from making status harder to achieve and to devaluing the accumulated mileage of their frequent flyers, it is increasingly more difficult for frequent flyers to maintain their status with their airlines.

In particular, the following changes and trends are worth emphasising:

From a strategic marketing perspective, these trends make no sense for two  reasons. First, it is well established that the cost of getting a new customer is considerably higher than customer retention. Depending on who you ask, it can be 4-7 times more costly to do so. Second, once again, an airline that chooses to not copy everyone else by eroding  the benefits of their loyalty program may be able to attain a differentiated advantage. But then again, as this blog has frequently opined, airline executives are obsessed with competitive parity…at the expense of strategic distinctiveness.