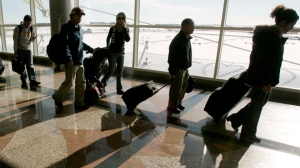 If you’re at an airport waiting to take a flight or your checking in online for your flight, you’ll see on the boarding pass a “boarding time”. If you read somewhere on the same boarding pass, you’ll see the airline claim that they will close the gate 15-25 minutes before departure. None, I repeat none, of those statements are consistently followed by the airlines. And we all know it – Including the ground staff at the gate and at check-in.

I recently took a flight from Istanbul. It was an intra-European flight. The boarding pass said that boarding was 1 hour before departure! The incoming flight that would be taking me away from Istanbul hadn’t even arrived yet at Ataturk airport!

So why do airlines continue to pay homage to a “system” that they can’t or won’t enforce?

I believe this is caused by two factors – both intensely organizational and human.

First organisational: the decision on when to board a flight is a complex combination of factors – airport air traffic control; hub control (an airport function) and the airline itself. Often times the monitors at the airport are pre-set to announce “go to gate” or “boarding”. Only human intervention can change that and frankly most ground staff have no motivation to do so.

This brings me to the human side of things and something that is in my view fundamentally at the core of poor airline performance (especially as regards ground services). You, the passenger, only go to the airport when you have a plane to catch. The ground staff and gate agents work there. They have to be there for a certain number of hours each day – whether or not you are there or your flight is on time.

Why should they care if you wait around for 30 minutes at the gate waiting for the actual boarding time? In fact, it’s in their interests to get you all there well ahead of the boarding time so they can herd you on to a bus out to the apron where the plane is waiting or get you on to a jetway down to the plane.

Remember they work there – they have to wait around.